1
Great shooting Dave!!!
2
I agree.  I took the opportunity to test several changes in rifle 'hold', fore end stop pressure, and rest ear pressure this weekend during a match.  This was on a 21lb fully rested F-open rifle.  The seemingly small things can be huge downrange.  If you were very recoil sensitive and were trying for 1" groups at 100yds for a hunting rifle I see no issues with using one for load development from a precision concern.  My only issue with a heavily weighted down sled with a hard stop on the arse end is shock loading the action bedding/stock and optics.  About 20 years ago I used a led sled for testing loads in a .300 Win Mag, 180gr bullets and broke a Burris Posi-lok and a Nikon Monarch scope back to back.  My father had his beautiful .300 Weatherby mag stock split at the tang and the bolt cut out.  No Mas on the Lead-Sled for me.  The sled was weighted down with a 25lb 'bar-bell' weight and a sand bag weighing at least 15 lbs.  There was a thin neoprene pad between the recoil pad and the metal stop on the back of the sled.  I have heard of many similar occurrences.
3
I don't think cooling is what slows down the AMP/AMP mate.  I can run cases in just under 6 seconds from pickup, place in the AMP, anneal, withdraw and dup in a pan; I run 10-11 per minute.  The AMP mate is a bit of a Rube-Goldberg device in its operation but, because the AMP was not designed to have an automation function when initially designed/produced I suppose it is the best they could do.  I think, if the mate could physically insert/withdraw cases faster the AMP could keep up....to a point.  I have had the unit go into a thermal shutdown only once (pre AZTEC) at about the 230 count point with 6.5 x55 cases.  It has not happened since the AZTEC upgrade.  One thing I find handy is having two case holders so one can be sitting in front of the window unit cooling off while the other is in use.  I get about 85-90 cases done before it gets too hot to handle

.
4
I have an AMP with the AZTEC software.  I like the convenience of being able to get a solid numerical value for each specific case type and set the unit to that value and be done.  Drawbacks are the lack of automation that I had with the Annealeeze I owned prior to that.  I know plenty of very competitive national level shooters, including champions, that use gas annealers (among them Benchrest, or equivalents, are the most used).  If I had a more open area to anneal my brass I would likely sell my AMP and get a quality gas annealer; running several hundred cases in a sitting is a major PIA with my AMP.  With a properly set up gas unit I think one can get the cases annealed with enough consistency between cases to equalize performance.  This requires getting a gas flow that does not fluctuate and this requires a decent size tank and a quality regulator...but very doable.

As far as the very expensive autoloader for the AMP....not ready for prime time and way too costly IMO.  I base this off of experience of a friend who was an early adopter and sort of a beta tester.  It seemed to jam more than enough to deter me and he ended up with a lot of very dented case mouths.
5
The 180 hybrid is generally accepted to have more consistent grouping under a wide variety of conditions than the 184 hybrid.  If I had enough for testing and the remaining big matches in the next couple of months I would be shooting the 180's.  Unfortunately I have not been able to get enough quantity.  I do have some 180 JLK's from one of Swampy's lots but I was waiting to see if I was going to commit with the 180-184 class bullets before using them since my .325 fb would be hanging them way out there to get near the lands.  I'm definitely going to leave the 190's be.

That being said about the 180's, the current 600yd F-open 20 shot record is 200-23x shot by Jim Fowler using 184's in a Shehane.  I was pulling his target when he shot the record and the conditions were tough enough that very few cleans were shot that morning.  I was shocked watching the majority of the 23 fall into a hole the size of a quarter.  I could not even put pasters on the hole; I just pulled the target down, confirmed no shot outside of the X ring and ran it up with the shot fall marker plugged into the only area of the X ring that had enough integrity to hold it in place.  I bet my pit service was under 2 second per shot; Jim made it easy.
6
I've noticed that to some extent also.  However I also find some barrels just clean easier within a given manufacturer.  The barrel I just finished development on cleans out in 15 minutes with little patching.  I have other Bartlein's that take a bit more effort and still will have a couple of grooves that hold a carbon/copper layer streak that is almost impossible to remove.  I have a Schneider that fouls so badly that it was gaining 100+ fps in 150rds and kept climbing in velocity until I gave up on it at around 1200rds (the other sits in the safe until I figure what to use it for....an axle perhaps?

After a few barrels and a couple of years trying to be competitive at national LR matches and having very inconsistent results I gave up on the long heavy for caliber bullets and pulled out some 184 Hybrids.  I OAL sorted them to 0.004" batches and started testing with H1000.  I have been finding a charge node around 2890's fps that panned out on three separate ladders at 2 different seating depths.  Finally it seem to be consistent and perhaps trustworthy.  I shot several sub 4" 5 shot groups at my 965yd test range with 2" vertical but I shot a screamer on Saturday...my best 5 shot yet at 965.  I hope the load holds up at our 1000yds state championship match this weekend.  I thought I would share.   I guess if shot 1 was not 'out' it could have really been sumthin'.  LOL  BTW, Dave...these were sorted Wolf primers 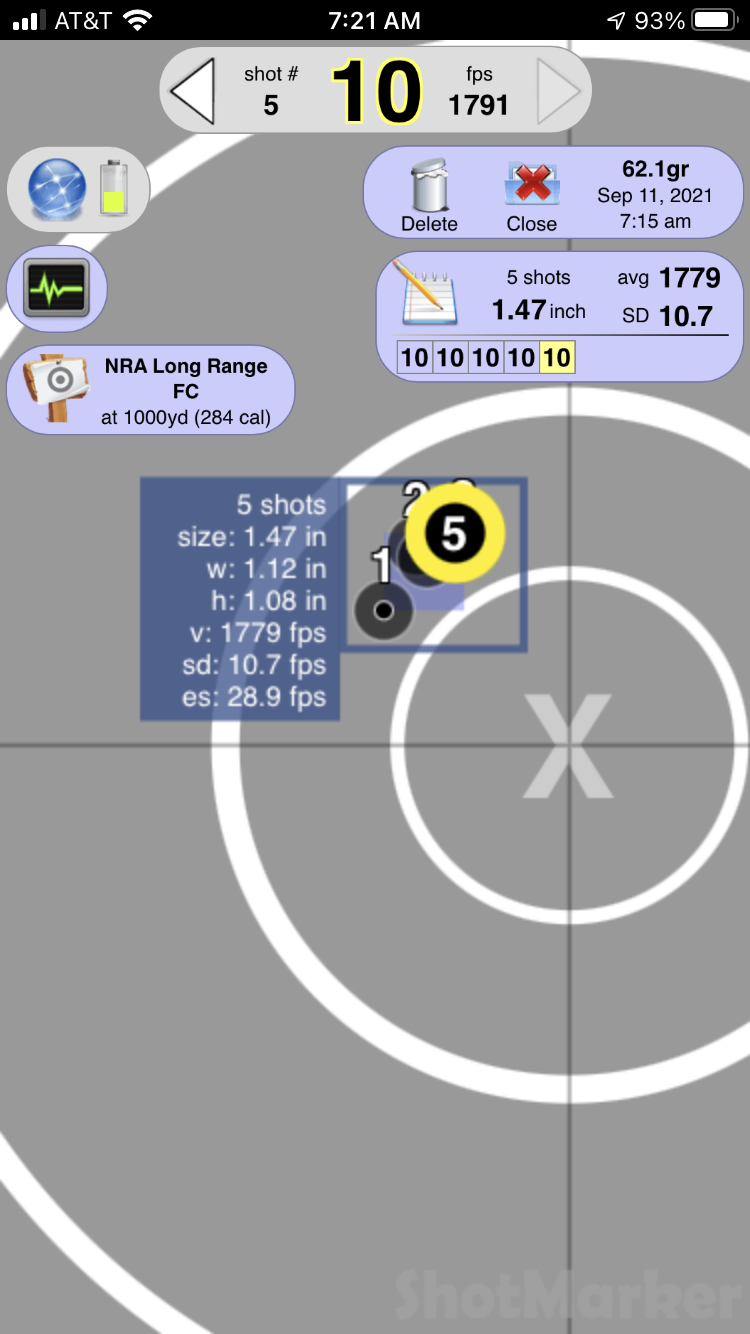 8
This appears, from my conversations with Craig, to be the future of military small arms cartridges.  I will have to ask if airborne cannon rounds are in the que for composite cartridge development.  A lot more 20mm rounds could be carried or have an increased operating range (time/distance) for ground support aircraft.

Another interesting note.  I asked him about neck 'tension'/grip and he said they have plenty with bare necks but they use an adhesive to make sure that the bullets will not dislodge under rifle recoil/simian handling. 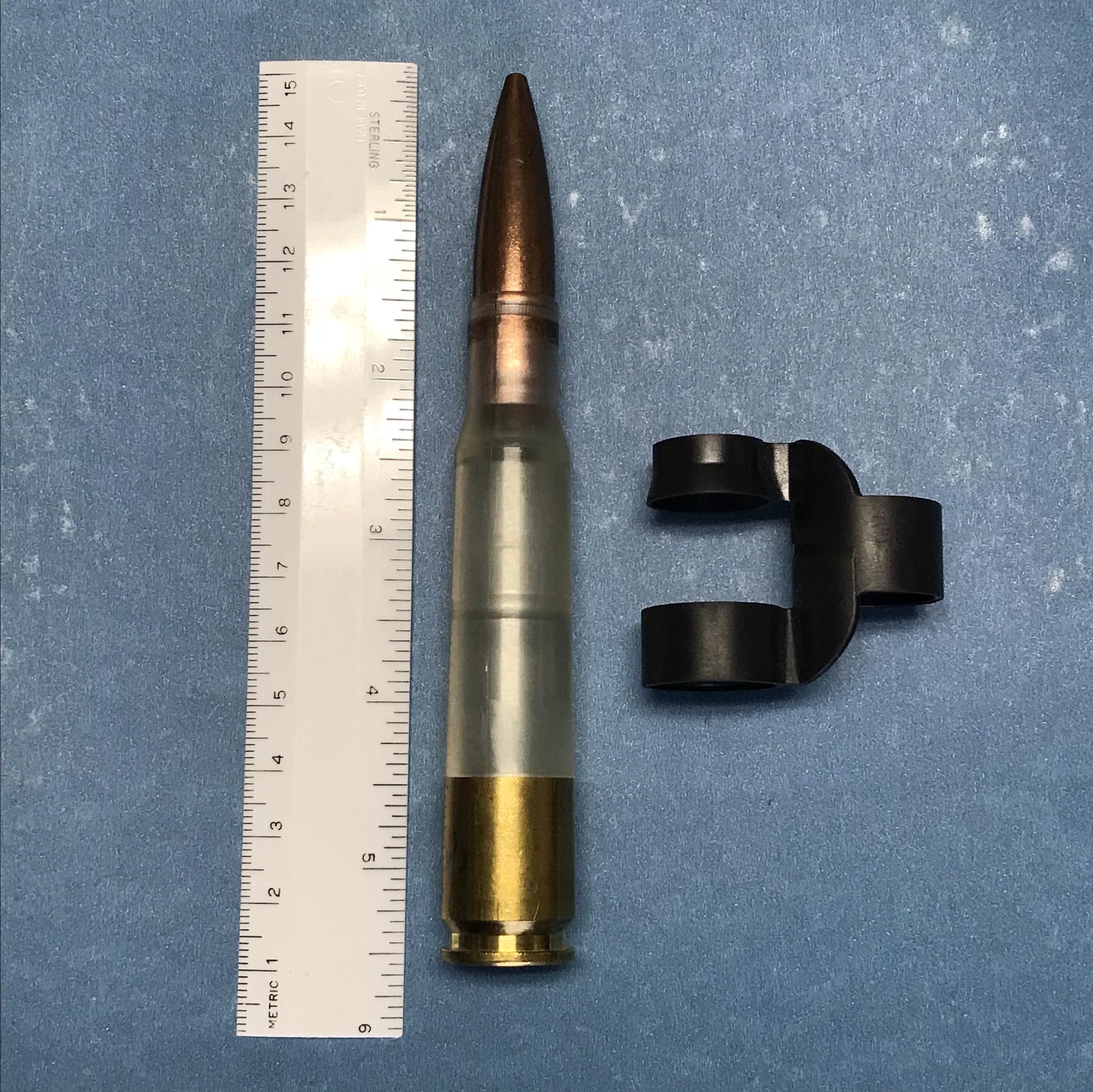 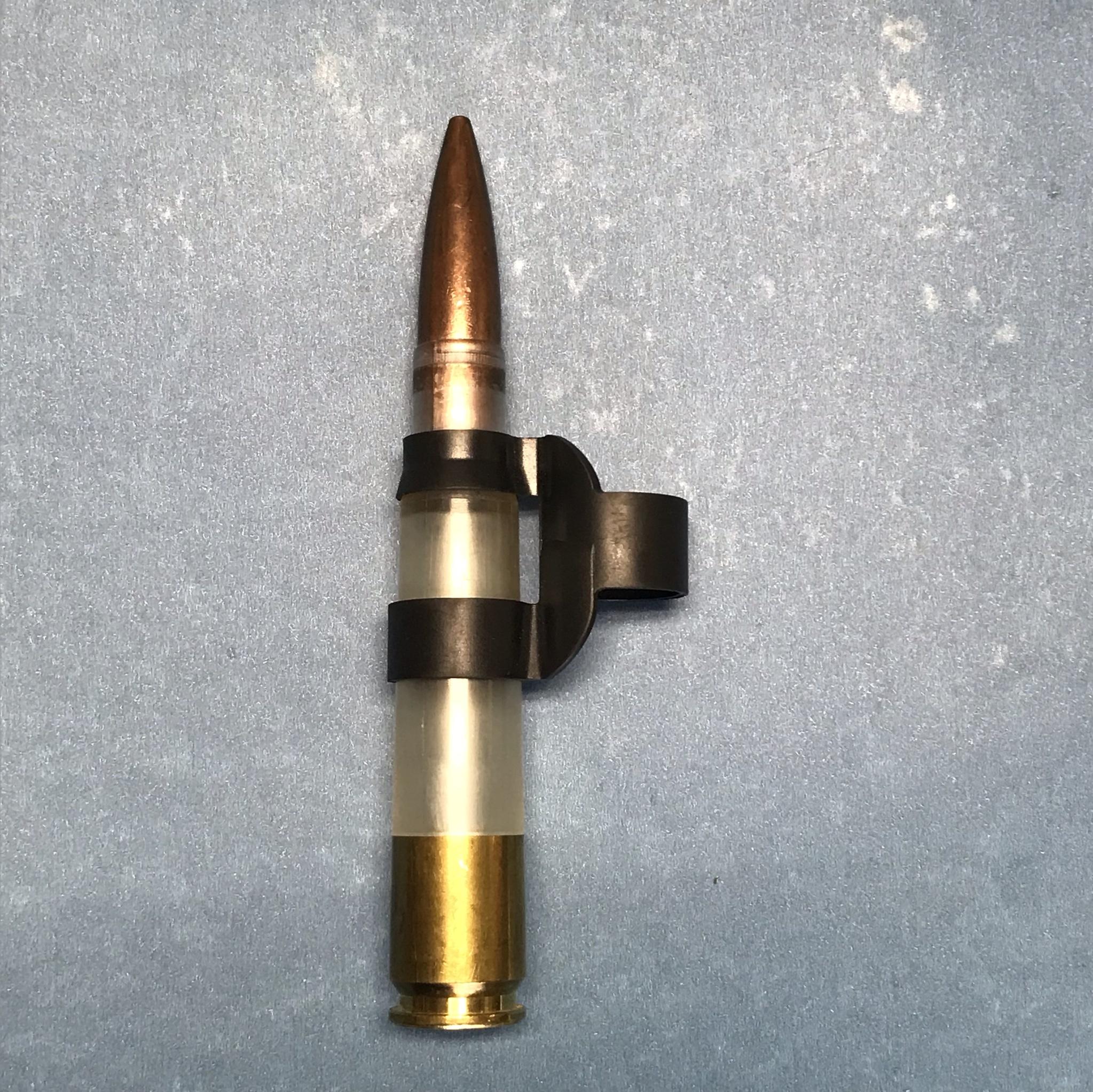 9
I'll chime in on this one.  A friend and fellow F-class competitor (F-TR) works as a product engineer with a company that produces hybrid composite/brass based cartridges on a military contract.  I happen to have a .50 BMG dummy round with associated plastic belt link in my truck given to me by Craig.  Very cool item.

They ARE reusable/reloadable and Craig has used the .308 cases in competition once.  He said the case volume is very consistent as well as the neck tension and resizing is not needed.  I don't recall why he does not use them currently but I'll likely see him and eat a few meals with him at our LR state champ matches this coming weekend and will ask.

The weight advantage works to the tax payers advantage in that shipping costs are MUCH less than brass cased ammo and those costs are significant in the military's budget.  Attack helo pilots have thanked him profusely as they can carry full ammo loads with much higher fuel loads that allow greatly improved loiter times.  You can imagine how that helps the ground troops.
10
Quote from: jvw2008 on August 16, 2021, 11:38:55 PM

I’m betting you did not weigh your primers in that ladder.

I have not weighed primers in the past 3 years.  I could not absolutely say that it helped but I was mainly shooting 600yds then.  Perhaps I need to revisit that process.  Honestly I hope it does not make a difference as I find it a tedious task

.
11
Yes, Gregg, this is an 8.25tw barrel.  I note I made a mistake.  I am jumping them 0.100"; I was confusing it with the 184's which I have at 0.010" off.  I'll retest with more neck tension.  Since I found the 184's have enough bullet in the neck to keep everything in place I'll also retest the 190's starting closer in and working out.
12
190 LRH or A-tip Gregg?  My issues with the A-tip is keeping the vertical stringing tuned out...a constant battle.  I have been told by friends who tested the 190 LRH that they could easily find a tune but there was a vertical 9 or two in every match.

I suspect that is part of the issue with the above group.  However, I was posting more of a hypothetical question assuming I have a good bullet and other load parameters are normalized between cartridges.  My variables as I see them are charge weight, seating depth, and neck tension.  Since I have a loooong freebore in this chamber (not a lot of bearing surface in the case) and I used a 0.0015" below bullet diameter mandrel to set the neck tension my seating pressures are very low for a 7mm; I am seating with most bullets moving at 10psi and topping under 15psi.  A small change in neck grip could mean a large difference is initial pressures.  I also arbitrarily seated at 0.010" off touch as most find the hybrids will shoot reasonably well there.  My charge weights were based on a 600yd 3 shot per charge ladder that suggested a nice broad node at the center of this charge weight test.  I'm thinking on increasing the NT and testing a couple of more mandrel sizes.  I am also going to give it a proper seating depth test.  I am also open the the very, very slight possibility that several seasoned competitors are right in that the 190 LRH will give unexplainable fliers too often to make them worth pursuing in F-class LOL

That being said throw out your ideas.
13
I'm testing another bullet in a new 7 Sherman Short build, a Berger 190 LRH.  Ladder testing showing promising results so I group tested at 965yds with 5 shot groups for each charge sweeping through the charge range that suggested a node.  I used an arbitrary jump that seems to work in the 180/184gr hybrids.  Assuming I did nothing stupid behind the trigger (hypothetical here guys

), no condition change, and the loaded cartridge had identical parameters to the others in the same group where would you go from here?  I have an idea but many heads are better than one.  BTW... .3gr increments in a case with 62.8gr practical powder capacity with H1000. 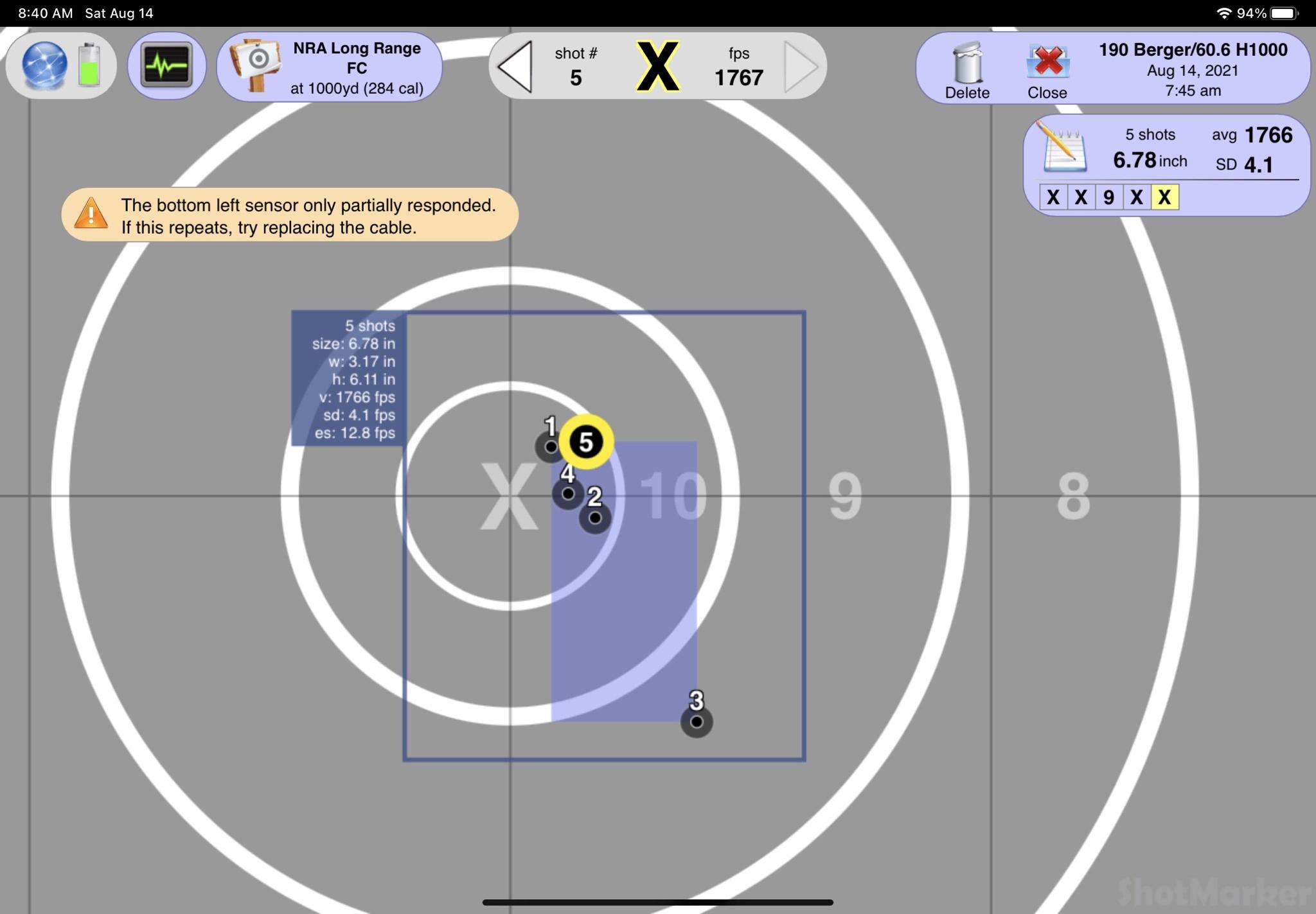 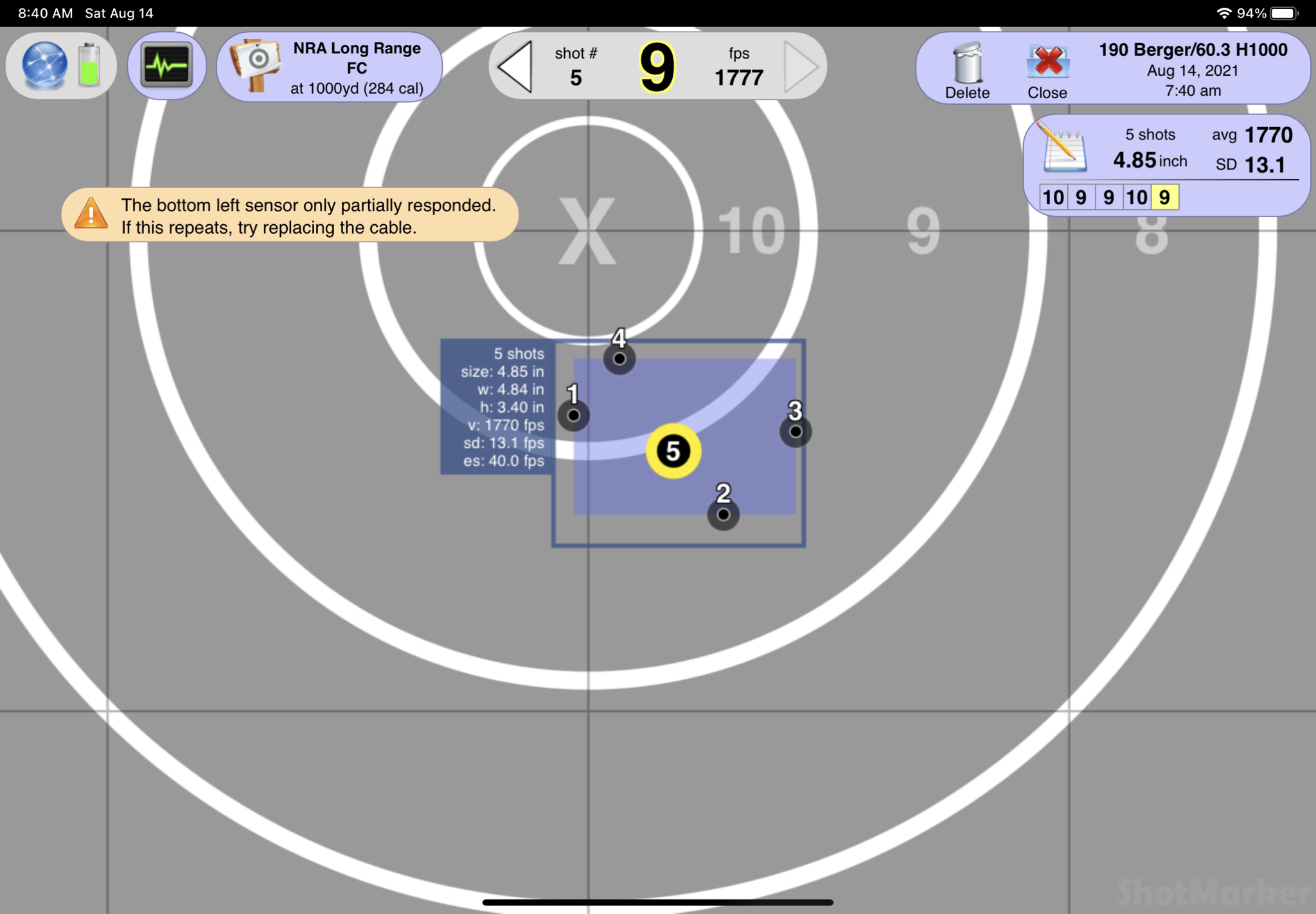 14
Welcome!
15
The accuracy, or more correctly, precision desired on target will dictate the precision needed for the loading process.  If you need 1/2 MOA precision at 100yds then probably .25gr weighing precision will get you there in a case the size of the Creedmoor.  This is assuming you have a good broad node/proper powder selected.  If shooting at longer distances maintaining that 1/2 MOA precision will require more precise weighing procedures.