This section allows you to view all Topics made by this member. Note that you can only see Topics made in areas you currently have access to.

1
Hey, just got my new rifle, and was curious if there were any new developments in cleaning solvents I should know about? I'm still very happy with M-Pro 7 and Ballistol (for my revolvers), but figured if anyone knew of a better solvent for rifles, it would be on this forum. Sound off and share the wealth.
2
I discussed an issue I’ve been having with my 6.5 when shooting suppressed and having heavy bolt lift on normally easy going loads. I noticed the brass had some sort of artifacts on the shoulder/body junction that I assume is allowing some of the gas to blow by, even though I have good expansion and sealing at the neck. Anyway, that’s my conclusion even if it doesn’t make sense. Here’s a pic of a few cases. These knicks are in several places all around the transition and the same “features” were seen in the chamber when I scoped it. 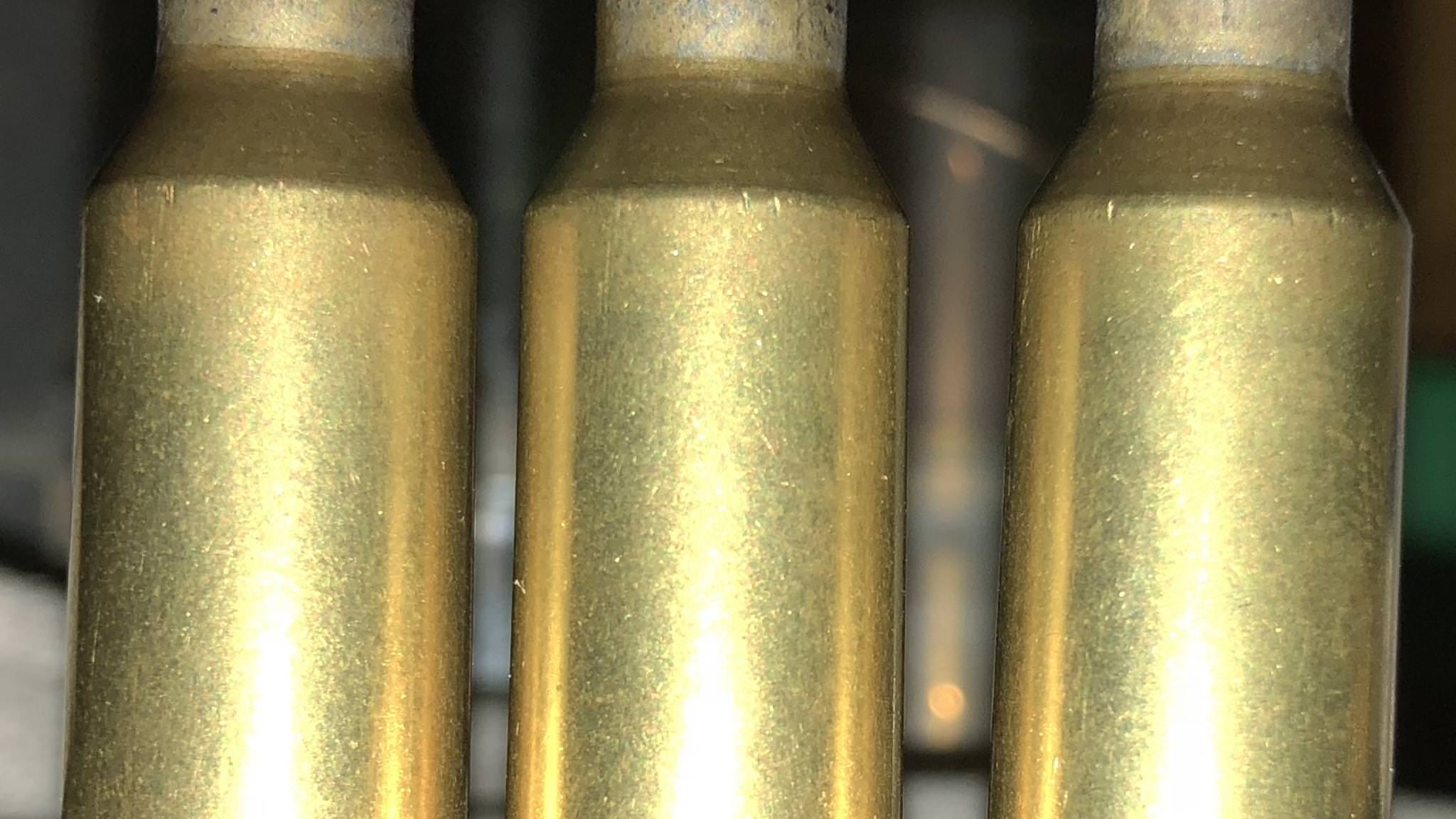 I’ll need to talk with Shilen about this and see if they can clean the chamber out for me.
3
I don’t get to shoot past 500-600 yards much, so I wanted to tighten up my groups for the long range trip upcoming Memorial Day weekend. So, I loaded my old RL-17 recipe at my new CBTO to validate that jump, and it’s a solid 1/2” performer. Then my RL-16 OCW year for the same 142 SMK tuned out great...

The bottom left was the lowest charge, working up clockwise to Top left, then Top right, shot round robin. The flyer in the first group was the second shot thanks to my shooting neighbor. Not his fault the Range has all the damn benches tied together, but it still hurts my feeling when I’m influenced by someone closing their bolt. Anyway, slight ejector marks from the top right load, so I’m going to load in the middle of groups one and two for the 1000 yard shoot. My 7mm08 is already squared away with the 162 ELD and 168 SMK. I’m stoked for the long range trip now! Oh yeah, average velocity for both 16 and 17 is around 2740. That should limp it’s way out to 3000’ pretty decently though. 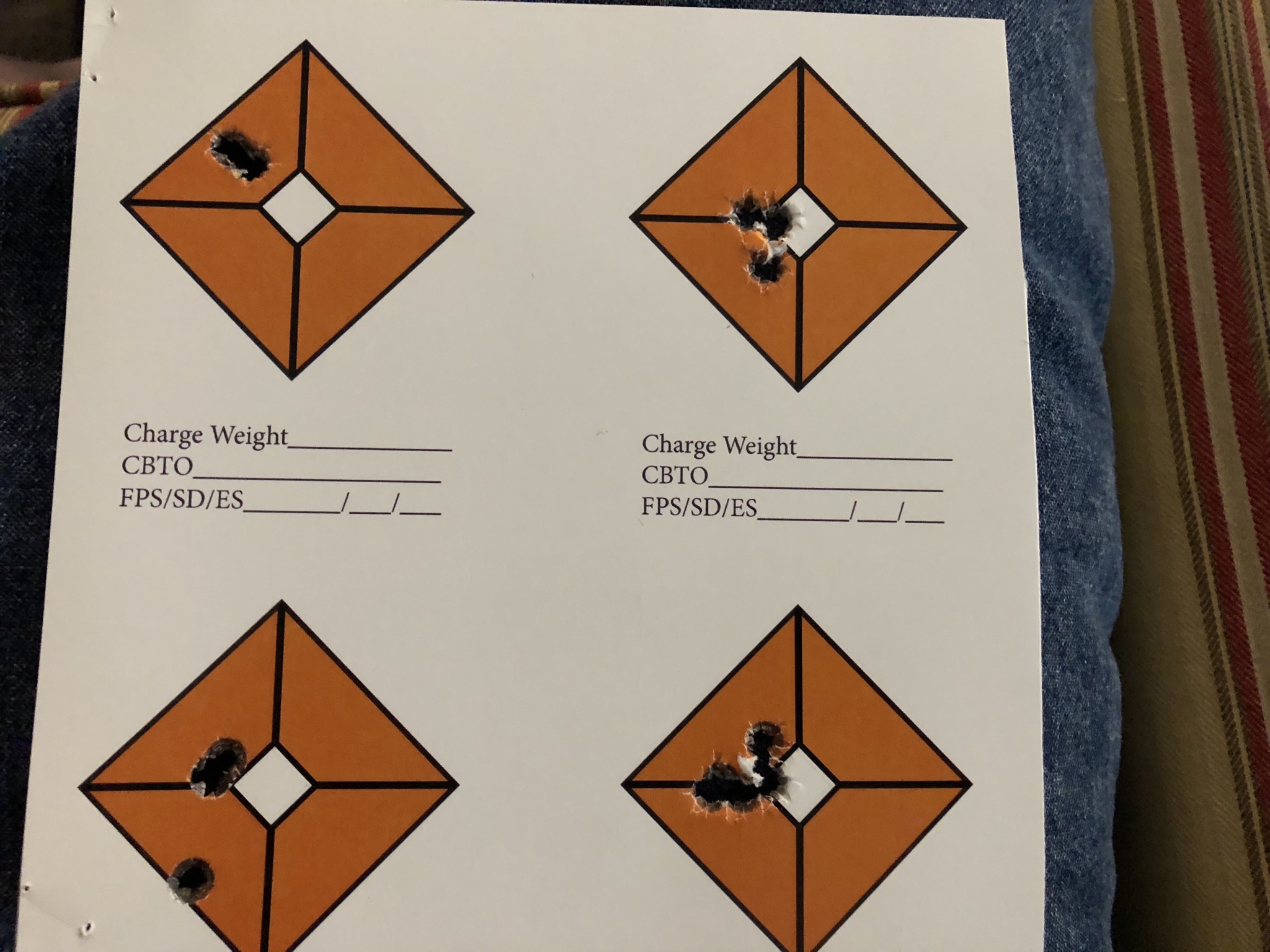 The bottom right target is a 5 shot group with the RL-17. I probably could of done better, but, nah no excuses. It’s still good enough for a grand.
4
Went out this morning to make some noise, and finish out my 223 Lapua cases so I can process them all at once. Didn't finish them, but I have 25 rounds for the next trip, so that's perfect. This was the highlight of the day. 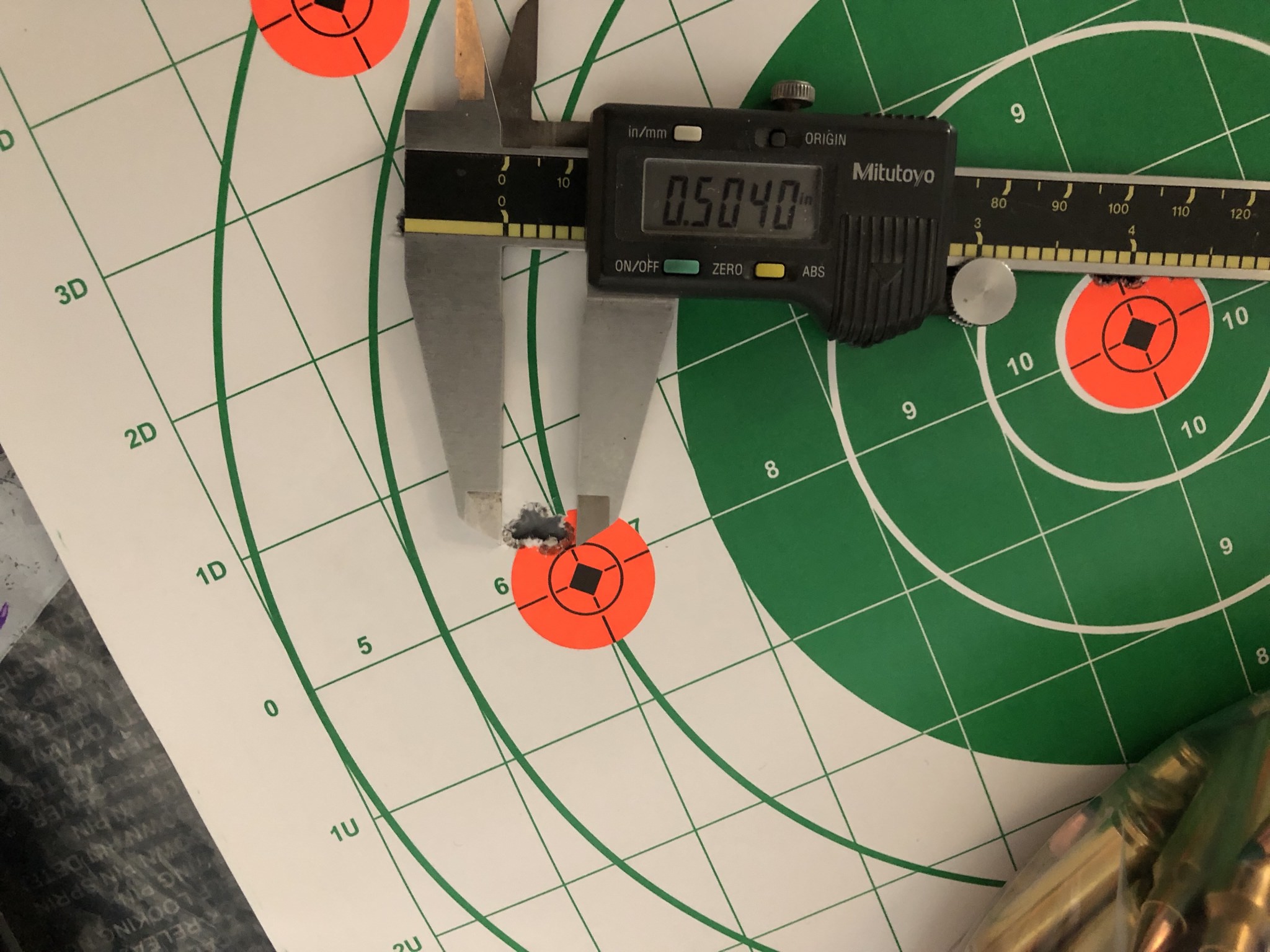 77 Lapua Scenar L with Varget. 5 shots. Had several other 1/2-3/4 MOA groups, but this one made me feel like I might get good at shooting rifles one day, maybe. taking the 0.224 out of the outside edges of the group makes it 0.280" center to center for 5 shots. Not bad, for a stock Savage target action with a Shilen bbl I put on myself.
5
I think I want a 7.62x39 AI chambered barrel for my Ruger American Ranch.

That cart could do so much more with a bit more case volume. I know projectile choices are sparse, but I could have the barrel set up for the American 30 caliber dimensions and use a 308 mandrel in the sizing die. I bet that powder column with some relatively high BC projectiles would be very accurate with a professionally installed bbl from a reputable smith, rather than some Rog in a garage cutting threads and eyeballing concentricity.

PS: 7mm08 Best round FTW
6
So, the ol’ 7mm08 shoots better than I can display, but this is good enough for even me to read the signs. Looks like I got a nice wide window for the first three charges, then I totally lost my beans on the fourth group, but redeemed myself with the last 5 round group. Shot left to right, then I adjusted the scope 1MOA up and left for the 5 shot group above the Dot in the second row. I can’t explain what was going on with the third and fourth groups, but horizontal spread points the dirty finger at me. Anyway, shoots pretty good, and I estimate the 168 is slipping downstream at close to 2700-2750 for the 5th group. Pretty decent recoil, but no pressure signs. The headspace is such that new brass has zero to an extra thousandth length and required the bolt to compress it to close. Alright, enough stalling. 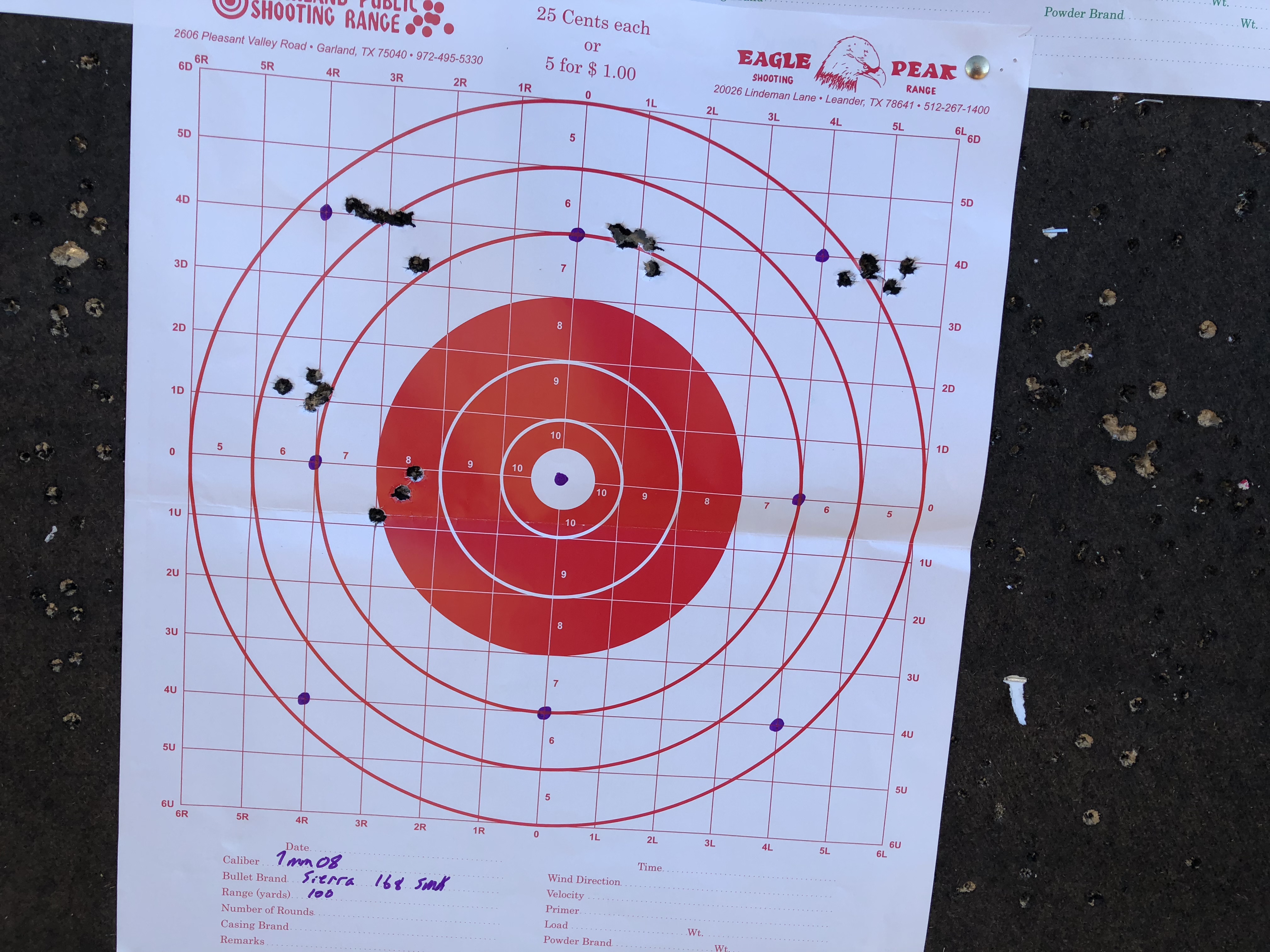 My 69 SMKs for the AR though, they were spot on at 0.514 +/- 0.001" for both batches, and I've had this batch of 69's for around 2 years. Good job Sierra, as usual.
8
Anyone else in here as fond of revolvers as I am? I kinda see them as the bolt actions of the handgun world. Stronger that autos, for the most part, they just plain work, and they are beautiful on top of it all. Just picked up my two newest members of the wheel gun family for lunch. And they do not disappoint!

9
So, I've had the action for my 223 build for a while, but now I also have the stock for it as well! I checked fit and function, and it is awesome. I really like the black with grey web on the stock, and the texture is very aggressive. I was considering cerakote, but the SS contrast with the stock looks really good! Here's a couple shots:

And a closeup of the butt, cause I know I'm not the only butt guy in here...

Can't wait to put the barrel on this badass and go plinkin!!!

10
Why is this something I am just now realizing is a thing? 15-60 with 1/8 MOA adjustments? I think I may have just figured out how I'm going to spend my next $1500. If you know why I shouldn't, let me know...
11
So, I got my powder earlier this week, and decided to load up some of my 142 SMK pulls from previous development runs that were either over pressure, or underwhelming. I was not expecting much, even though they should of still shot fine, but some of them got a bit more clingy than others when using the collet puller. Regardless, this was a velocity test first, and a accuracy check second.

I'm loading the 6.5x47Lapua, as you know, so I stayed a fair amount under the max charge Sierra listed for the Creed. I started at 36.4 grains and worked up 0.2 grains to 38.2 since this is a new powder, and I am a stickler for the rules. Sierra puts their Creed max at 43.5, so I imposed a max of 41, but still wanted to work up slow. I got velocities up 2680 fps at 38.2 grains, and the potential accuracy was nothing short of spectacular.

I was impressed with the aggregate for almost two full grains spread in charge weight. Then I started shooting 3 shot groups with the remaining loads of the top five charge weights. This one was 37.8 grains:

And this one was 38 grains.

Needless to say, I am going to investigate this node further. I think a 2670 FPS load with the 142 SMK that shoots like that will be good enough for someone like me who doesn't compete, and really only want to impress myself at the range. So, I give my preliminary nod to the RL-16, and am not beginning to have any sort of buyers remorse about the 8# jug in my reloading room. Not. One. Bit.
12
Ok, I know I haven't finished my latest build, but dammit, I want to build another. And this time, I want it to be a custom action/barrel/stock. The full monty, so to speak (hat tip to our brothers from other mothers across the pond). I'm still trying to squash this insane desire for a 338 LM, but I know one day I'll have one of the damn things in my safe wondering why I ever bought/built it.

Ok, these are the requirements:

1. Must be able to accept a Savage style barrel nut for mounting.

That's it. I've already looked at Bighorn and Defiant actions. I'll need to talk to them personally, and I have a friend who is on chatting terms with the guys over at Stiller. A Shilen action is most definitely in the running, as I love their barrels and will almost certainly be using one for this build. I would like to have the rail integral to the action, but it isn't a deal breaker if I need to buy one for the job. I'm not concerned with controlled round feed; I won't be hunting black rhino or anything like that. So, let me know what to look in to. Thanks.
13

I bought a couple hundred cases for my 223 build, and one of the boxes had a bunch of discolored cases in it. True, it also had 101, but that's not a win when there's 13 cases with this happening:

There were also several cases like this in the 200 I bought for the 7mm08. They seemed to be alright, and they cleaned up fine after I fired and SS tumbled them. I just think it's kinda janky that they treat these inferior cases like this and their 308 and 6.5 cases are beautiful. Their 6.5x47mm cases are astonishingly beautiful.

Ok, rant off...
14
So, it isn't going to be a 6.5, so general thread only, but this is going to be a suh-WHEAT rifle!!! Got a brand spankin new Savage 12 single shot target action complete with target accutrigger and stainless trigger guard. Got in the precision ground lug and barrel nut this afternoon! And a call from Shilen confirming they received my dummy rounds and will throat the barrel to just kiss the lands at that CBTO for the 80 grain Nosler CCs I'll be shooting. Oddly enough, that 2.400 OAL will only make for a 0.010" jump at the same CBTO I measure for 69 and 77 HPBT bullets. My measured CBTO is 1.881" for 2,265" OAL with the 69 SMK to be able to feed in the AR. The CBTO for the 80 grainers is 1.991" at 2.400". I was going to make the throat super long, like 2.250" CBTO, but then I would really be stuck with only the 80s, and I'm not going to load RL-17 behind them anyway. I did do some simulations and found at 2.500", I could probably get over 2900 FPS out of the 28" bull barrel. Anyway, this is the action mocked up with the lug and barrel nut... I'm such a gun nerd!

And the bolt out glamour shot... lmao!

It really will be a special day when I thread that barrel into this action. It should be like twisting butter into a hole in butter... Good times!

15
@Wilson1911 I got the 147s in the mail today, and loaded up a group to check a couple nodes with the x47. Using H4350, CBTO of 2.157" which is 10 mils off the lands in my rig. Once fired, annealed (albeit, by hand), neck sized Lapua cases. Shilen 26" with comp and can. Will get velocity from 37-38.8 grains, and I expect something around 2725-2775, but am leaning to the slower end of the spectrum. I'm using CCI BR-4 since I am sure you do not use Tula SRM, and I'm also curious if the PTG bolt head will allow for softer cups to run at the higher pressures with the massive extrusions I saw with them originally. So, I should have a follow up with numbers and initial accuracy from 38-38.8 with 3 shot groups at 100 yards Saturday or Sunday. It will be nice a cool, so I'm excited. Love shooting in the cold!

Anyway, I'll let you know when I have more info. Oh yeah, I'm running about 0.003" headspace on a go gauge so I can actually bump the shoulders once they are fired.